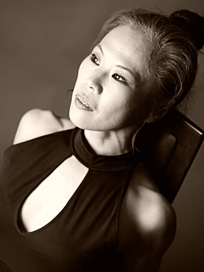 Representative Director Dance “MOVE” Company
Miki Komori was one of the first Japanese contestants to win the Grand Champion title on the US TV program “Star Search ’89”.
At that time, the team ‘J’ comprised Hirotsugu Kurosu (later of ‘Convoy’), Chikanori Sato, Tomoko Kuroki, Chikako Nakazato and Miki Komori. In that same year, the team returned to Japan from New York to give triumphant homecoming performances and to take part in Japan’s first dance contest.
(Performances in Sapporo, Kanazawa, Fukuoka, Kagoshima)
Komori has been active as an instructor and performer in many overseas venues, including New York’s Broadway Dance Center and the Amsterdam Dance Center in the Netherlands. Her dancing ability was recognized by choreographer Rick Atwell, and she appeared in the dance musical ‘Move!’ (at the Theater Carre in Amsterdam).
Upon returning to Japan, she formed the Dance “MOVE”!! Company and has been busy with many public performances and the nurturing of new talent.
She is a recipient of the International Art and Culture Award and an owner-member of the Jazz Dance Art Association of Japan.